A ground-breaking report from scientists at Glaxo and Epizyme has now revealed that the PRMT1 inhibitor, GSK3368715, exhibits potent anti-tumor activity. Extensive chemical and cellular studies support the usefulness of the new chemical compound as a First-In-Class therapeutic agent. Also described in the report are experiments that implicate the endogenous metabolic inhibitor, methyl-thioadenosine (MTA), in the mechanism of action of methylation inhibitors. Reduced activity of the methyl-thioadenosine phosphorylase gene, which removes MTA from the cell, correlates with GSK3368715 sensitivity in cancer cell lines. All of these observations call attention to the methylation metabolic cycle described by CH3 BioSystems in the article Protein Methylation in Health and Disease (Biotechnology Annual Reviews 14: 203-224, 2008). 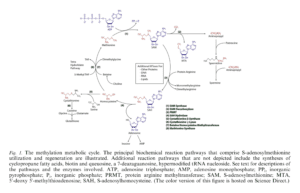