THE INTERSECTION OF CANCER AND PROTEIN METHYLATION 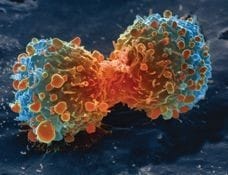 Protein arginine methyltransferases (PRMTs) are transcriptional coactivators, a type of coregulator that affects a transcription factor to increase the rate of transcription of a gene by recruiting general transcription machinery to the promoter region. The aberrant expression of PRMTs can have far reaching effects, modifying many transcriptional pathways. PRMTs have been found to be elevated in many types of cancer, including colorectal, liver, and breast cancer (4). Whether this was circumstantial or not wasn’t known until recently, but now there is a good amount of evidence suggesting that PRMTs play a critical role (10).

PRMTs have also been shown to affect epithelial to mesenchymal transitions (EMTs). Cancer cells must undergo EMTs before they can migrate to and invade other tissues. PRMT5 has been demonstrated to interact with SNAIL, a transcription factor that represses E-cadherin expression, through a bridging molecule AJUBA (11). E-cadherin repression is a hallmark of the EMT process, meaning that increased PRMT5 activity can facilitate EMT.

siRNA mediated PRMT5 knockdown has been shown to result in higher E-cadherin expression, indicating that PRMT5 is a critical SNAIL corepressor. PRMT5 overexpression has also been observed to promote anchorage independent cell growth, suggesting that PRMT5 may be directly involved in tumor generation (12).

Protein methylation events also affect DNA damage and repair processes, which are crucial in restricting carcinogenesis. DNA polymerase beta, MRE11, and p53 binding protein 1 (53BP1) are all important methyl-proteins involved in these DNA repair processes. MRE11 has a glycine arginine rich (GAR) domain that is methylated by PRMT1. Substituting the arginines with alanine in this domain has the effect of deterring any exonuclease activity, indicating that methylarginines must be present for optimum exonuclease activity (13). A methylation dependent event was confirmed in the activation of S phase checkpoint control by showing that cells treated with PRMT1 shRNA progress through the S phase after DNA damage, but not when methylated MRE11 was introduced as well. These results indicate that PRMT1 and possibly methyl-MRE11 are necessary in DNA damage and repair mechanisms.

53BP1 GAR domains are also methylated by PRMT1, but in this case the event does affect 53BP1’s DNA binding activity. 53BP1 also has two tandem Tudor domains that are necessary for its’ recruitment to DNA damaged sites. Mutating the GAR domain arginines effectively reduced 53BP1’s ability to bind to DNA (14).

DNA polymerase b is a multifunctional protein, with at least three arginine methylation sites (R83, R137, and R152), that is a key component in DNA base excision repair. PRMT6 mediates methylation of residues R83 and R152 and stimulates DNA polymerase b activity by improving DNA binding without affecting any other functions (15). Residue R137 is methylated by PRMT1, also not changing enzymatic functions of DNA polymerase b, but it does inhibit the interaction between it and cell nuclear antigens (PCNA; a marker for proliferation and discoidin domain receptor).

High mobility group A (HMGA) proteins are DNA regulators that are overexpressed in cancer cells and are subject to protein methylation. The AT hook DNA binding region of HMGAs are specifically methylated by PRMT6 at residues R57 and R59, with R59 methylation associated with increased metastatic potential (16).

The first proven cause and effect relationship between PRMTs and carcinogenesis was discovered by Cheung et al. in 2007. The mixed lineage leukemia gene (MLL) codes for a lysine methyltransferase, and can be reorganized through chromosomal translocation to form a MLL SH3 domain containing fusion protein major family. Primary murine hematopoietic cells were transduced with MLL fusion protein, producing an acute myeloid leukemia that was similar to the human disease associated with the fusion oncoprotein. The researchers created a direct fusion of MLL and PRMT1 and another direct fusion of MLL and SAM68 (a protein that can be methylated). Cells treated with the fusions experienced transformed myeloid progenitors and an enhanced self-renewal mechanism. Fusions made with inactive PRMT1 were incapable of transducing cells. Specific knockdown of PRMT1 or SAM68 suppressed MLL mediated change. With this data the authors concluded that a critical role of PRMT1 in carcinogenesis is present. It is still unknown whether the mechanism involves activation or repression (or both) (17). 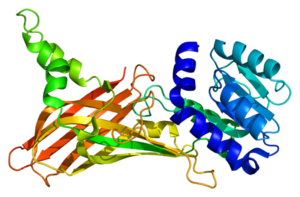 PRMT5 is the main type II PRMT, and can be found in mammalian cells, both within the nucleus and with the cytoplasm. It has been found to be important in transcriptional regulation, interacting with a large number molecules. It is responsible for causing a symmetric dimethylation of the H4 and H3 histones on their R3 and R8 residues respectively. This has been observed to have the effect of suppressing ST7 (a tumor suppressor gene), and cyclin E1, as well as repressing cyclin-dependant kinase inhibitor 2A (CDKN2A), a cell cycle regulator.

PRMT5 can induce the transcriptional silencing of p53 and MBD2 changing their functions. It can regulate programmed cell death protein 4 (PDCD4), which when co-expressed with PRMT5 accelerates tumor growth. PRMT5’s location within the cell changes, and can have an effect on controlling the cell cycle. PRMT5 has been observed to methylate EGFR on its R1175 residue, contributing to the phosphorylation of the Y1173 residue. This attenuates EGFR mediated ERK expression, which can have far reaching effects on the cell cycle. When R1175 is methylated it creates a site for SHP1, a phosphatase, to bind, impeding the downstream EGFR signaling pathway. It is possible that a shift of PRMT5 into the nucleus decreases R1175 methylation, which triggers an increase in EGFR mediated ERK signaling, which increases cancer cell proliferation, migration, and invasion capability. PRMT5’s role in so many pathways indicates that its regulation may be very sensitive. Too little or too much expression can cause a number of issues (4).

Colorectal cancer (CRC) is of particular interest, as it is one of the few instances where tumor growth has been inhibited by targeting a PRMT. CRC is the third most common cancer, typically developing slowly over at least ten years. Over 70% of CRCs develop through the adenoma carcinoma sequence, beginning with the mutation of the APC gene. The pathway continues by affecting KRAS and TP53 gene expression. Other forms of CRC are formed by unrelated pathways. Elevated levels of PRMT 5 have been established as being present in approximately 75% of CRC cases (18).

Liver cancer is another instance where tumor growth has been decreased by manipulating a PRMT pathway. This type of cancer is the fifth most common cancer, with a survival rate of less than 10%. At present the best treatment for advanced hepatocellular carcinoma (HCC) is Sorafenib, which only increases survival from 7.9 to 10.7 months on average. This represents an urgent need to develop better therapeutic strategies to treat HCC. Prior to the publication of Zhang et al (19), a relationship between PRMT5 and HCC had not been established.